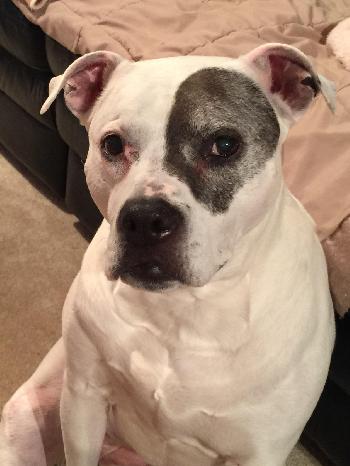 It is hard to gauge how blessed I was to have found Sally on that beautiful August afternoon in 2004. I was seeking another dog to adopt so I went to the Petco in Westland to see what dogs were there for adoption that afternoon. Upon getting to the store and approaching, my life changed. Buster Foundation was set up in front of the store and I was greeted by Sally, with a gentle kiss on the leg and her tail wagging.

As I viewed some of the dogs that were there for adoption, at first I assumed Sally was one of the volunteer’s dog, I was approached by Joanie Wazney and was notified of Sally’s availability. Joanie couldn’t stop praising Sally’s temperament and what a beautiful dog she was. I jumped at the chance to bring her home. I cannot emphasize enough how special my dear baby Sally was.

Soon after getting her, Sally tore a tendon in her rear left leg that required surgery. The procedure was done a Gibraltar Veterinary Clinic by Dr. Patrick Mech. After the surgery, Dr. Mech could not stop commenting on Sally’s demeanor, and that she should be the poster dog for the pit bull breed. Everyone Sally came in contact with fell in love with her. Sally never met a dog, cat, squirrel, or human she didn’t love. She would always greet you with a kiss and lots of love. Sally loved her brother Romeo (Died 2013) and sister Izzy (Died 2015), Buster brother Rico, and though for a short time, her newest brother Snoopy.

Over the 11yrs I was blessed to have Sally, the sheer joy she brought to me cannot be measured. She was the best to cuddle with, so patient, so full of love and always happy. Sally demanding her morning and evening Blue Buffalo biscuit were highlights to my day. As time goes on, you know your time with your special dog is limited, and Sally was no exception. As we celebrated Sally’s 12th birthday, I kept thinking that maybe, just maybe, we can have one or two more years with her. Unfortunately, that was not to happen as we learned in October 2015 that my baby had an aggressive form of bladder cancer and that treatment was not recommended due to the aggressive nature of it. Sally was special until the end - loving on the vet techs and vet before her beautiful life ended.

At the time of her death, Sally was Buster’s oldest living alumni dog. My life will always have a void in it with Sally gone. She was truly a once in a lifetime dog, and she will be missed so very much. I would like to thank the Buster Foundation and Joanie Wazney for giving me the opportunity to bring Sally into my life and being able to give her a beautiful life.

But most of all, I would like to thank Sally for 11 years of pure love and happiness.